The Future of H1Z1

With the launch of the Combat Update this week, we’re excited to bring you a glimpse into the future roadmap of H1Z1. Your feedback was hugely instrumental in helping shape the combat update, and now that it’s live, we want to share our vision with you as we take the next steps toward redefining what it means to play H1Z1.

Our vision is for H1Z1 to be the dominant fast-paced, action packed game in the genre. This is what sets H1Z1 apart from its competition. PUBG is very clearly a slow paced, tactical experience. And they have certainly delivered on that vision. But ours has always been and will continue to be based on fast paced & action packed moment to moment gameplay. In the coming months, all of the updates and features we bring to the game will be driving towards fully delivering on this vision.

Today, we want to share with you how we intend to speed up matches & deliver on action packed in the next few months: 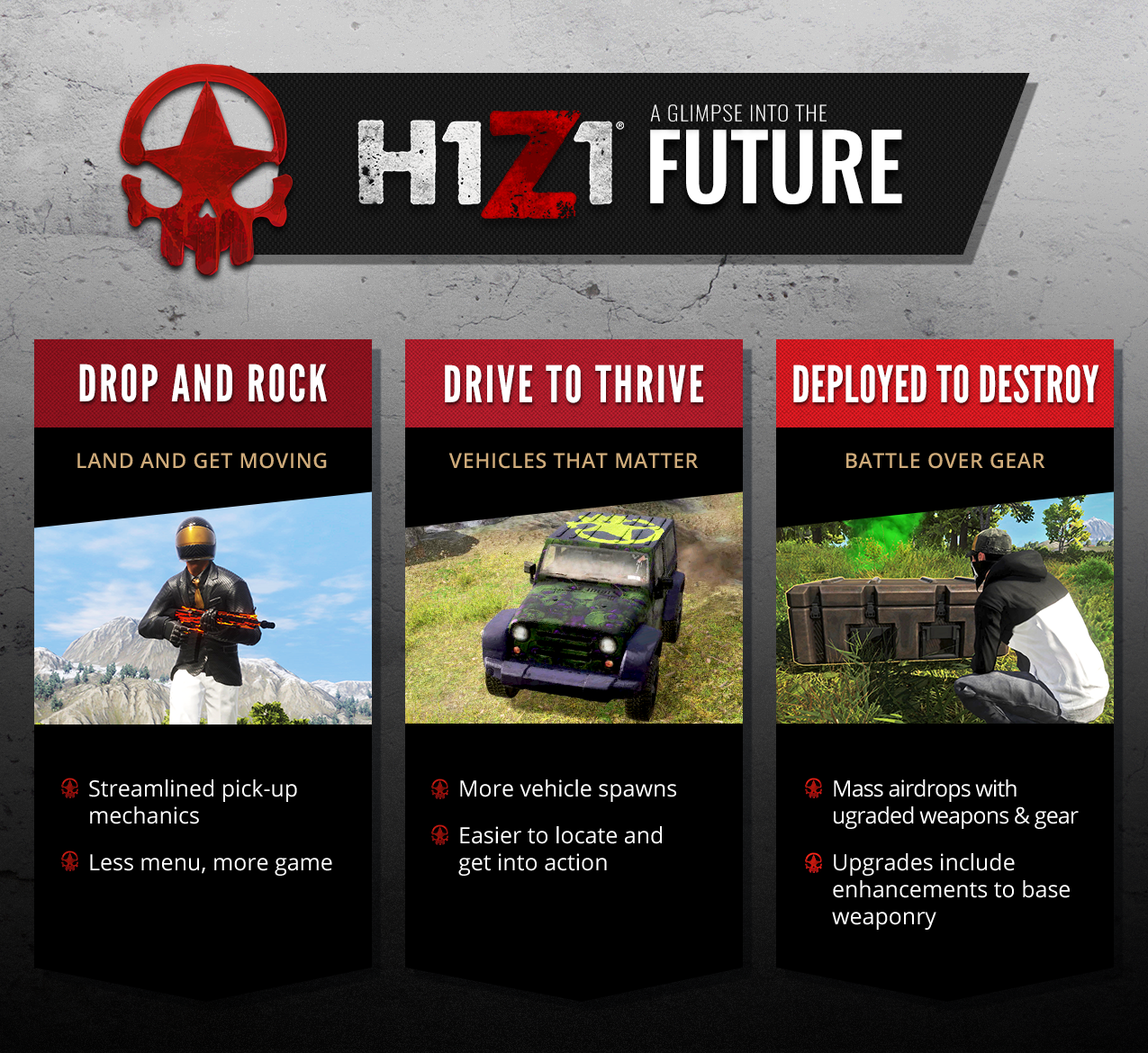 The goal is to put less emphasis on the tedious aspects of looting and more emphasis on power progression and vehicles to speed up gameplay.  We want to keep players on the move.

Based on these core gameplay principles, here’s how we envision a typical match of H1Z1 would play out: As the match starts to ramp up, multiple supply crates are airdropped into the arena at the same time. These airdropped crates are loaded with upgraded variants of the weapons found around the arena to give you an edge over the competition. You’ve got a choice: Get aggressive and hit these airdrops before your opponents, or try to outmaneuver your opponents and let them make the first move. Supplies will airdrop in waves with more powerful weapons coming in as the game goes on. Action in the end-game is intense, so you’ll build up your arsenal from airdrops and downed players if you want to be the last one standing.

We know this is a bold move and we’re committed to challenging ourselves to create the best experience possible as we continue to raise the quality bar and get ready to head out of Early Access.

I'm sure many of you are wondering how these changes came about. Let's start with the goal ​and the purpose behind our ideas. Our goal in H1Z1 is to embrace our quick pace of play, push our limits when it comes to the action, respect and maintain the spirit of H1, and take this platform that launched the Battle Royale genre into a place that it deserves to be. We wanted to add more depth to a H1Z1 match by offering the player more choices and more tools so they have additional ways to craft their destiny as a match plays out.​ We want to create a Battle Royale game that is fast and entertaining, start to finish. H1Z1 is a competitive game first, and we want to put more emphasis on skill and strategy, reward aggression to keep the match fast, and reduce the RNG of loot. With these goals in mind, we started to evolve the design of our current game. ​

​Now, onto the design. We think that increasing the number of airdrops and adding in-game power progression adds another layer of strategy and reduces the downtime in the middle of the match.

We agree that looting for attachments have no place in H1; that was never the plan. Attachments go against the ​DNA of H1Z1 -- they slow the looting phase​ and​ how they spawn is RNG​.​ Plain and simple​, they aren't going in​.

​We want to escalate a match while giving the player more options to chose how they want to play, while driving conflict and increasing intensity. We think this can be accomplished by evolving our airdrop system. By making drops more meaningful and impactful, players will have to decide how they want to engage: go for it first and take the chance, hang back and capitalize on someone else taking the risk, or keep pushing with their current loadout.

In the airdrops, there could be an array of items in the crate, including different types of armor, health items, tiered weapons, even new types of weapons are within the realm of possibilities. There are many ways we can achieve this and we’ll be working with you to see which system best fits the game.

We want tiered weapons to add utility, not provide a direct addition of crazy power.​ A tiered weapon isn’t going to have an 80X scope (too powerful of scopes add unwanted distances to fights and promote camping)​ and it won’t remove the required skill needed to efficiently operate a weapon. What it will do is add a bit more benefit to the weapon and how it functions. For example, an AR with a red dot sight awards the player easier visuals without ​promoting camping, and makes the gun more enjoyable to use. ​ A Tier 2 or Tier 3 AR will still do the same amount of damage as a Tier 1 AR.

Movement keeps the game fast. And while we want people to be mobile, have the ability to explore and engage in combat, we don’t want every match to end with a bunch of cars driving in circles. Vehicles speed up the pace of the game, but we know they need a counter. We have some additional improvements coming to weapons like explosive tips that will help stop cars dead in their tracks.

You can run through the game, hit up 10 houses​, and find zero helmets. Then, on your 11th house, you find 10 helmets and it results in you being frustrated at the game. We have been working on a new loot system to take the RNG edge off of looting, provide a more consistent experience, and get you out of the looting phase and onto the killing phase in a more efficient manner. Now, there is still some level of RNG with loot, but our goal is for you to never feel at a disadvantage by the loot distribution. This will also provide players with the tools to push forward and contest those airdrops we’ve talked about.

So, we’ve spoken about loot, match progression, and our ideas for the future of the game. This is where you come in. We will be testing extensively on our ​T​est server​ and even before it hits Test.​ We aren’t going to just take this idea and send it live; we ​will take our time, get feedback, improve, iterate, and get it right.

Circling all the way back to the beginning, the stuff we’ve talked about is not going in before the Invitational. The H1Z1 Invitational build will be based on the current Combat Update with some additional quality of life improvements and some further weapon tuning. While we've made some huge strides forward with the game with the Combat Update, we know that it’s an adjustment. Rest assured, we will lock the Invitational build early enough to give you ample time to practice.

​Thanks to everyone that made it this far and took the time to read it all the way through​. We're proposing some big changes to the game that will help move us forward, but we aren't going to do it without you. Without a doubt, H1Z1 has one of the most passionate and dedicated communities and we’re looking forward to going through this journey together.