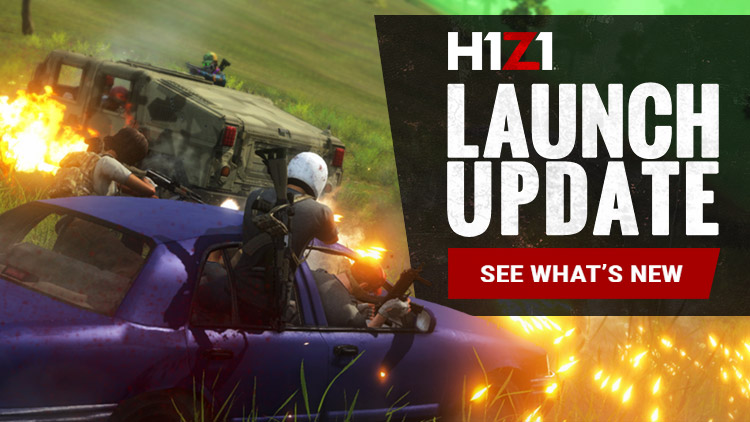 The time has come for our next major update to hit our Live servers and what’s an update without all the good details provided by patch notes. We’ve got a bunch of information below but keep an eye out for our Producers Letter that will have even more insight, information, and maybe even something special. We’ll also be releasing more information soon on our next crate, the Mayhem Crate, so keep an eye out for that too.

We would like to take a quick moment and thank everyone, once again, for all of the feedback provided by the community while this build was on the Test Server. Working with you all to make sure we hit the key beats of every update has become a way of life for us on the H1Z1 team and we’re looking forward to continuing this with you in the future.

See you in the pit,

Players can now select the quadrant of the map they’d like to spawn in while in Fort Destiny.  Want to get right into the action?  Spawn in Pleasant Valley.  Want to take your time to loot up in peace?  Try out the Dam!

We are moving away from a high kill top 10 scoring model and we have implemented one that focuses on 3 different segments:

Once the modifiers have been applied a user will be given their ranking. This new system will challenge the player to play more conservative and be more consistent in their play but will still require them to see kills just not as aggressively as the current live scoring model. In the new system, players can de-rank, however rewards will be earned based on the highest rank achieved for a season.

Based on feedback we’ve received since our last update, we’ve fine-tuned some of the most used weapons in the game to make them feel a bit smoother, however none of these changes will impact timing or muscle memory.  Reset timing for tap shooting has been preserved.

It’s been far too long that players haven’t been rewarded for just playing H1Z1 and it’s time for that to change. With this update we’re reintroducing Match Rewards back into the game.

The Victory Crate contains over 75 brand new skins that are untradeable and unmarketable, but scrap for the same amount as skins from paid crates of equal rarity.

Winning isn’t the only way for you to get your hands on some of these new skins, you can opt to do a bit of grinding and you can buy them from the Skull Store for 7,500 Skulls each. You can also earn 2 Victory Crates by completing the Tutorial Challenges if you wish.

We’ve taken a pass on the Account Leveling system as it needed some love. The old system gave a crate every 5 levels and the process didn’t feel as rewarding as it could have.

We’ve seen a ton of feedback around visibility and lighting in the Arena so we’ve made some adjustments to help increase visibility at all ranges.