Executive Producer, Chris Wynn, sheds some light on the upcoming launch of King of the Kill 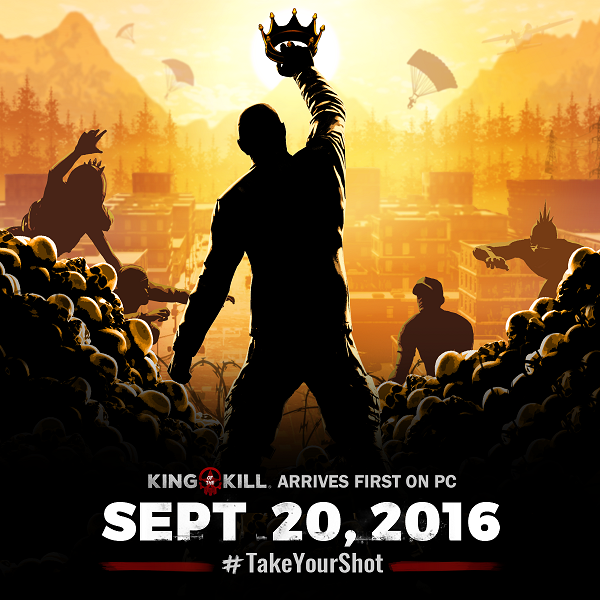 The most important news in quite some time -- I am thrilled to say that we will be launching King of the Kill on the PC on September 20, 2016.  This entire year has been focused on reshaping, tuning, and polishing all of the core systems.  With new mechanics to make the game more interesting, a brand new UI, and an entirely new map, the game has really come a long way over 2016.  Your feedback has been instrumental in helping drive and shape the experience that we were shooting for, and now I feel like we can give back a bit when we launch the full experience.

Some of you are probably wondering what that means for the console versions of the game. When I first joined the H1Z1 team, I looked to build a plan that would get H1Z1 out of Early Access and shipped on three platforms.  Working out that schedule, everything lined up for a summer release of the game. We were just as excited as our players with the idea of King of the Kill on their PS4 or Xbox One.  As we started to execute against that plan, it became apparent that the schedule was just too risky.  We were spread too thin trying to fix areas of the game while simultaneously getting the game to work on the console hardware.  It became clear that to best line up the game for success was to reduce the number of variables in the equation.

As a result, I have decided to pause our efforts on the console versions and put 100% of the focus on to the PC version of the game for right now.  It was definitely a tough decision, but I think it was the right one to make.  We have been able to make essential updates to the gunplay, combat, and vehicles, get the new map in a state to go live, and add lots of polish to the core areas of the game.

We are committed to delivering a high-quality experience, one that is both satisfying and enjoyable. We are creating a competitive game that is consistent, predictable, fair, and as fun to watch as it is to play.  By structuring the plan in this way, we ultimately will achieve higher quality targets and not put the game in a situation where we have to compromise quality to hit a date.

What does that mean for an Xbox One and PS4 launch?  As soon as we ship the full PC experience out of Early Access, we will turn our focus back to converting that same experience to run on the consoles.  I don’t want to promise an exact date,  since we are committed to doing it the best way possible at the expense of time. We will keep you up-to-speed on the progress that we are making against that plan through continuous producer’s updates and posts on other channels, such as Twitter and reddit. We have many, many fans excited to experience King of the Kill on their consoles, and we are very excited to deliver it to you in the right way.

Now that the news is out about release dates, I want to give a quick update on some of the upcoming launch features.

A really great feature that will be available on launch day is Scoring. Available in the solo experience, each match will be scored based on your finishing positions and number of kills.  The system was designed to be a real measure of success instead of having to rely on your overall number of kills as a measure of well your game went. And, it will give you immediate feedback on your improvements and let you see how you measure up against your friends.

Scoring also layers into our new leaderboards.  Leaderboards will be seasonal in that, over a predetermined period of time, you will fight, shoot, and claw your way as high as you can before the end of the Season.  Your overall position on the Leaderboard will be determined by how well you score in the matches you play. We are excited about this feature as it’s bound to help intensify the level of competition. We will have more details on this system in the coming weeks.

More great news today is that The Arena will be replacing Z1 on our Test servers on September 2, 2016.  It will still be undergoing some bug fixing and optimizations while on Test, but it is ready for full-time playtesting.

The Invitational will be played on The Arena, so I expect to see the participants in there sharpening their skills and learning the new map. We will also be calling out numerous playtests when we jump into the map to test it out with a larger number of players.  Watch some of the Devs’ social feeds for when that will happen.

Speaking of the Invitational, today we announced the final round of Invited Players, which includes some of the fan favorites from last year like LIRIK and Sodapoppin, as well as tournament newcomers such as Charlespbf1 and nmp. It’s definitely going to be something you won’t want to miss.

If you will be attending PAX West in Seattle this weekend, be sure to drop by Booth #1909 as we will have a lot of great activities going on, including the chance to win t-shirts, Pinny Arcade pins, and other prizes. I will be there myself, so I really hope I get the chance to meet some of you and share some stories of your time in the game. All the PAX West details here.

Due to popular demand, we have decided to bring back Snipers and Shotguns for another run as the skirmish in September.  Get in there to earn the 4 unique rewards over the course of the month.

The whole King of the Kill team is excited to get the game launched on September 20.  It has been a long road, and one that we could not have done without you.  I really and truly appreciate every piece of feedback and hour put into the game since it was released into Early Access.  King of the Kill doesn’t stop here, we will continue to listen and keep meaningful changes coming as the game grows.