Climb the leaderboards in duos and fives and earn new rewards!

The major game update on June 29th marks the start of Preseason 5 and introduces the initial phase of team scoring! Read on for a recap of Preseason 4, an in-depth look at what's new in Preseason 5, and the rewards you can earn for Solos, Duos, and Fives!

One of the adjustments we made going into Preseason 4 was in response to feedback we received about Royalty seeming too easy to obtain. By the end of Preseason 4 we saw Royalty land much closer to the mark than before, but by making Diamond the new 10-win benchmark, we saw a significant buildup of players in the Platinum tier. For Preseason 5, we're introducing a new tier to help provide a cleaner distribution of players - more on that below! 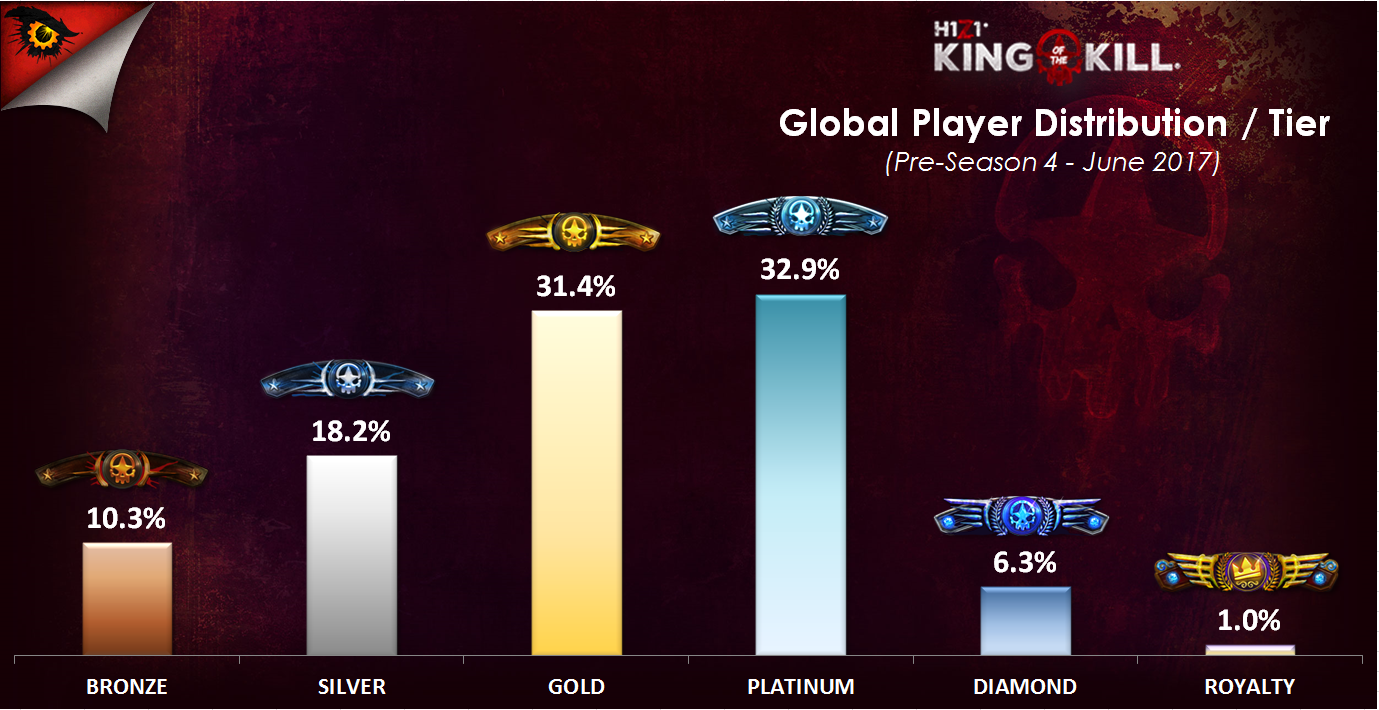 Scoring and leaderboards are now activated for team modes, meaning you can now earn a Top 10 score and climb the ranks in Solos, Duos, AND Fives!

Your score in a Duos or Fives match is calculated as: (Team's Total Kills * 1,000) + (Team's Total Assists * 250) + (Team's Placement Score). Everyone on the team receives the same score at the end of each match, but you will be able to see your individual performance as well as your teammates' performance in the revised Match End screen. While assists are factored into team scoring, they are not currently included in Solo scoring.

Team scoring and Solo scoring are still a work in progress - we'll continue to tune, tweak, and respond to your feedback in order to improve and optimize the system. Be sure to let us know your thoughts on the current balance for team scoring on Reddit or Twitter!

As mentioned above, we're introducing a brand new tier for Preseason 5 - Master! This new tier sits comfortably between Diamond and Royalty to help smooth out the distribution of players. Attaining Master will require you to get 10 wins in your Top 10, much like Royalty back in Preseason 3. Royalty will preserve its rightful place at the upper end of the curve, requiring not just 10 wins, but ALSO 50 total kills across your Top 10. Will YOU be the first to reach Master in Preseason 5?

We've reworked how Divisions are calculated in Preseason 5. As a quick recap:

Previously, we used the percentage of players in each Division to determine when you ranked up into the next one. Due to the nature of the Top 10 scoring system, this meant that the goal posts were constantly moving, and there was no clear-cut progression to the next Division. For Preseason 5, Divisions are now fixed score thresholds within Tiers, which means we can more clearly message how close you are to the next one. You'll get a sense of your progress between your current score and the next Division's score threshold in the new Match End screen!

All kills are now worth the same amount of points, regardless of when they occurred in the match. This means no more lower-kill games occasionally outscoring higher-kill games due to a greater ratio of late-game kills. Kills will always be worth 1,000 points across all game modes.

Placement scoring has been revised in Preseason 5 and adjusted accordingly for team modes as well. For an in-depth look at what you'll earn for kills and placement in each game mode, click here!

With team scoring, a new tier, new kill scoring, and new placement scoring, overall Top 10 scores will be calculated a bit differently in Preseason 5. Tier thresholds have been tweaked accordingly as well, so here's what you'll need in order to achieve each tier:

Where will YOU place on the leaderboards in Preseason 5? Let us know on Facebook, Twitter, and Discord!