A fresh start means new rewards for climbing the leaderboards!

Today's major game update brings you a new challenge: Preseason 7! Check out our recap of Preseason 6, learn the new score thresholds for Preseason 7, and get a peek at the rewards you can earn for Solos, Duos, and Fives!

Preseason 6 more evenly balanced out the distribution of the Master and Royalty Tiers, as can be seen below: 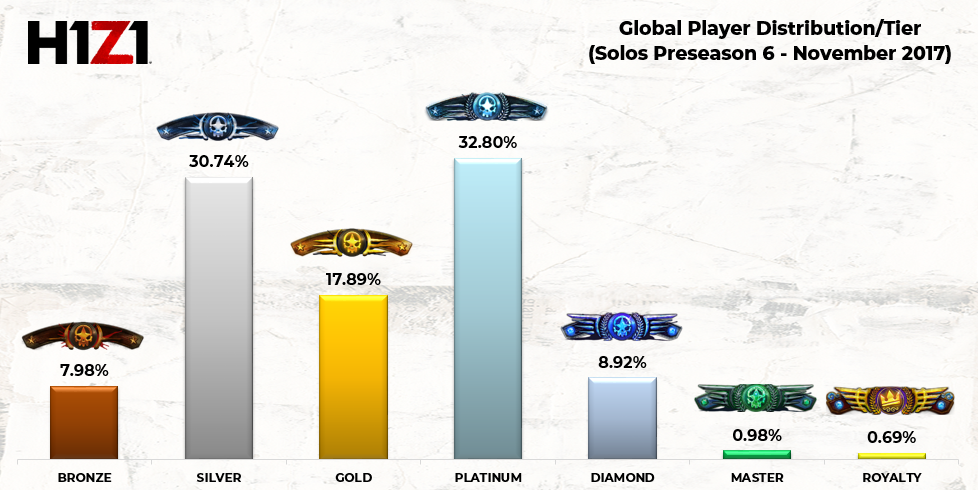 However, there were still a few too many people in Royalty as compared to Master, so Preseason 7 adjusts the Tier thresholds to make it slightly harder to get into Royalty in all 3 modes.

Kill scoring and placement scoring will be the same in Preseason 7 as they were in Preseason 6. As mentioned above, Division calculations have been adjusted for Royalty 2-5, making Royalty slightly harder to achieve in Solos, Duos, and Fives. Royalty 1 is equally as difficult to achieve as it was in Preseason 6.

For reference, here are the thresholds you'll need to hit in order to reach each Tier in Preseason 7:

There's one other major change between Preseason 6 and Preseason 7 - rather than Scrap being your reward for placing in different Tiers, you'll now earn Skulls instead! More on that below.

The Tribute collection grows in Preseason 7 with the new Tribute Tactical Helmet and Royalty Tactical Helmet! You'll receive these rewards at the end of Preseason 7 by finishing Gold or above in Solos, Duos, or Fives. Also new for Preseason 7 - you'll receive a certain amount of Skulls (rather than Scrap) at the end of the season based on your placement. As before, you'll only need to reach the required rank in ONE mode in order to be eligible for the Tactical Helmet, and you won't earn multiple Helmets for placing in multiple modes. However, you WILL receive the designated amount of Skulls from each mode based on your placement. In summary, while you'll only receive one instance of a Tactical Helmet that you qualify for, you'll receive the Skull payouts of each Tier across modes.