An update from Executive Producer Chris Wynn on hit registration, Skirmishes, and more.

We're about to release our next game update on the Test Server, which includes improvements to hit registration, the shotgun, new POIs, updated inventory UI, and skirmishes. We are very excited for how this update improves the overall gameplay experience and eagerly await your feedback on the changes.

We are making tremendous strides towards our goal of delivering you with a game that is consistent, competitive, fair, and fun to watch. Our next big priorities are ranked team games and overall gunplay and gameplay balance. We will be sharing more on our future plans soon.

The amount of support for the game is really amazing. It was gratifying to see H1Z1 make the all-time top 10 list for peak number of players on Steam last weekend and we owe that to you, our dedicated players. We cannot thank you enough. Also, congrats to Obey Alliance for winning Fight for the Crown, our first ever team tournament. It was energizing to spend time with the players at the event and I’m excited for what the future holds.

More details about the update are below and we look forward to hearing your feedback, which will help determine the timing and contents of the update that gets promoted to the Live Servers.

This update includes the release of improved and optimized hit registration code. This was a multi-step process that started with a large server revamp to improve server performance and distribution. Then, we rolled out region locking to get a more consistent experience and allow us to focus on specific tuning. The final step was to improve the actual hit registration code. Overall consistency will be much better once this rolls out.

If you are familiar with some of the network analysis videos that were done, there was a topic referred to as “lag compensation” analyzed in a variety of game titles. We have greatly optimized this now, which means more consistency in terms of player movement and less positional desyncs.

We also increased the fidelity in which projectiles are tracked to improve consistency with shots hitting opponents. These changes make it less likely for you to accidentally shoot the driver in your car if you are firing from the passenger seat.

We will continue to watch gameplay closely and we encourage you to send us clips if by chance you still encounter any issues. Keep in mind that local network conditions can still adversely affect hit registration - the system works best when everyone has a good, stable connection.

After refining hit registration, we reviewed the shotgun’s role and design to address its inconsistency: why does it take two shots to kill in some situations versus one shot to kill in a similar situation in a different match?

To fix this, we made a series of changes to the weapon, including reprogramming its firing pattern. A large problem in the current shotgun is that it fires a random pattern of eight pellets.  While we had tuned the spread and damage previously, we were still seeing too much inconsistency due to the random spread patterns. Sometimes, three pellets may hit your target, but you could fire again with no other changes to the game condition and have five pellets hit your target. This inconsistency makes a difference in a high-stakes close gunfight, so we needed to find a way to remove the randomness.

The new and improved shotgun now fires a systematic pattern of 17 pellets.  We increased the pellet count to improve the likelihood of striking your target and opted for a defined pattern for better consistency of the shot across all of your matches.  We also removed damage scaling over distance, opting instead to rely on the shotgun’s spread to reduce the number of pellets which actually strike your target at longer distances.

Skirmishes will be making a triumphant return to the game.  For those of you that are new, Skirmishes are alternate ruleset matches that run on weekends to provide variety to the game. These will rotate on a regular basis and modifications to the rulesets range from limiting weapon types to changing loot to even altering how safe zones work.

We previously talked about our first Skirmish using the Ignition ruleset, but we’ve decided go with a fan favorite, Snipers and Shotties.  All Skirmish games will only have sniper rifles and shotguns as weapon spawns in the world.

We continue to refine the Arena based on player feedback and observed play patterns. On the visual side, we’ve lightened interiors and shadow areas slightly and we’ve decreased the amount of fog. Some textures were tweaked, particularly the grass, to not be so bright overall.

On the gameplay side, we added three new POIs to populate the area of the map around Pleasant Valley. These were all built with gunplay in mind and we look forward to seeing fights take place in these new areas. 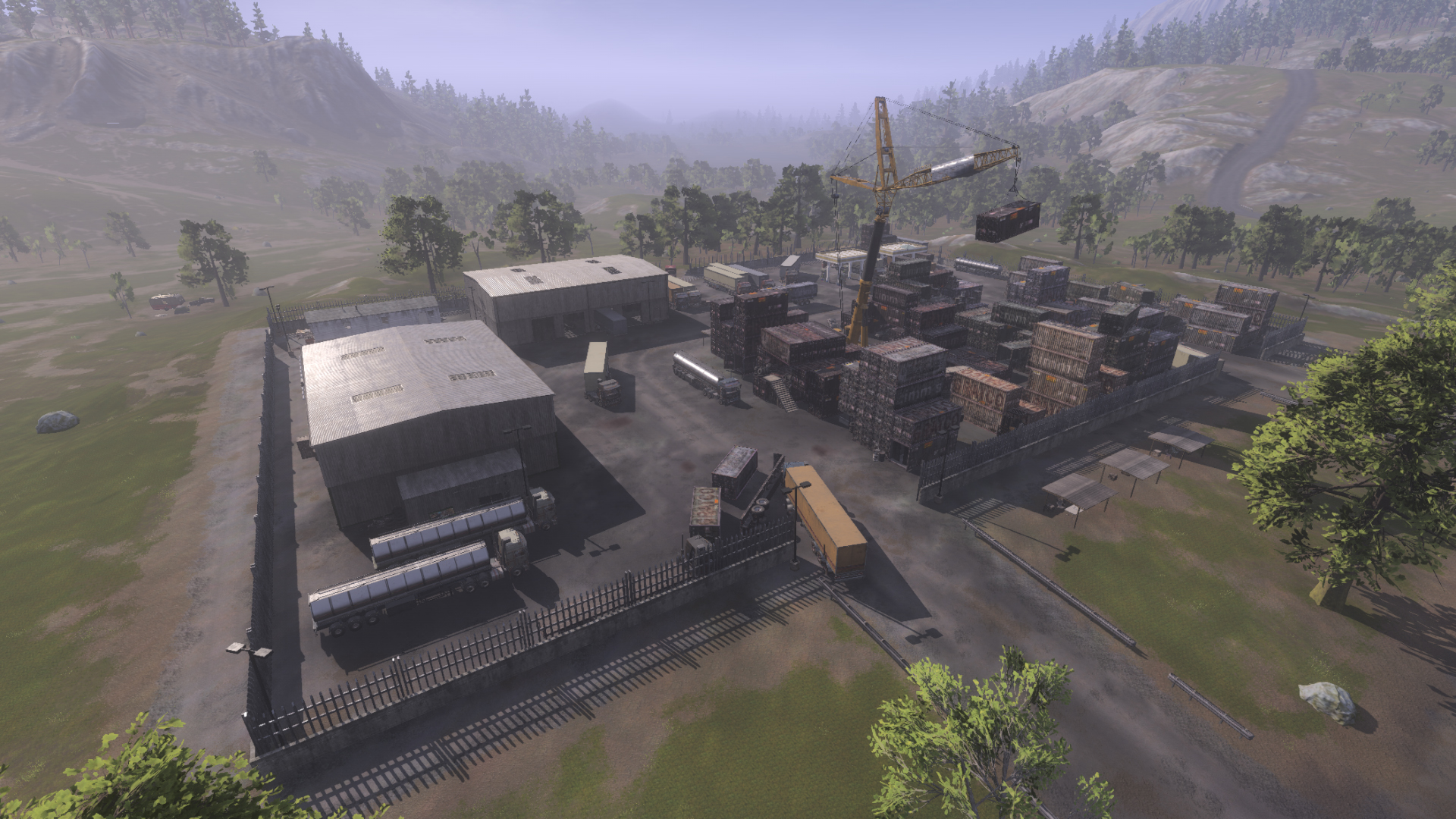 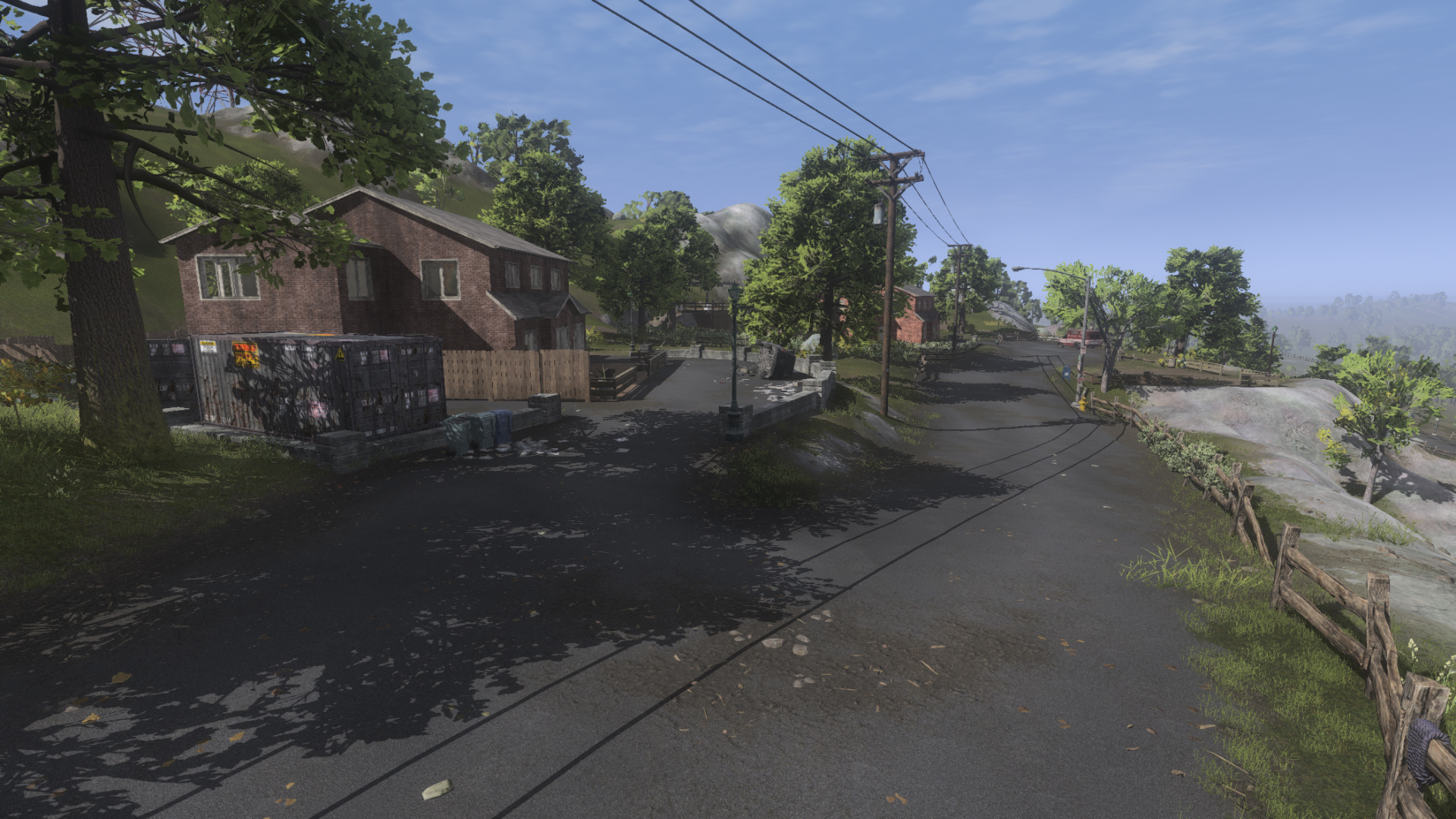 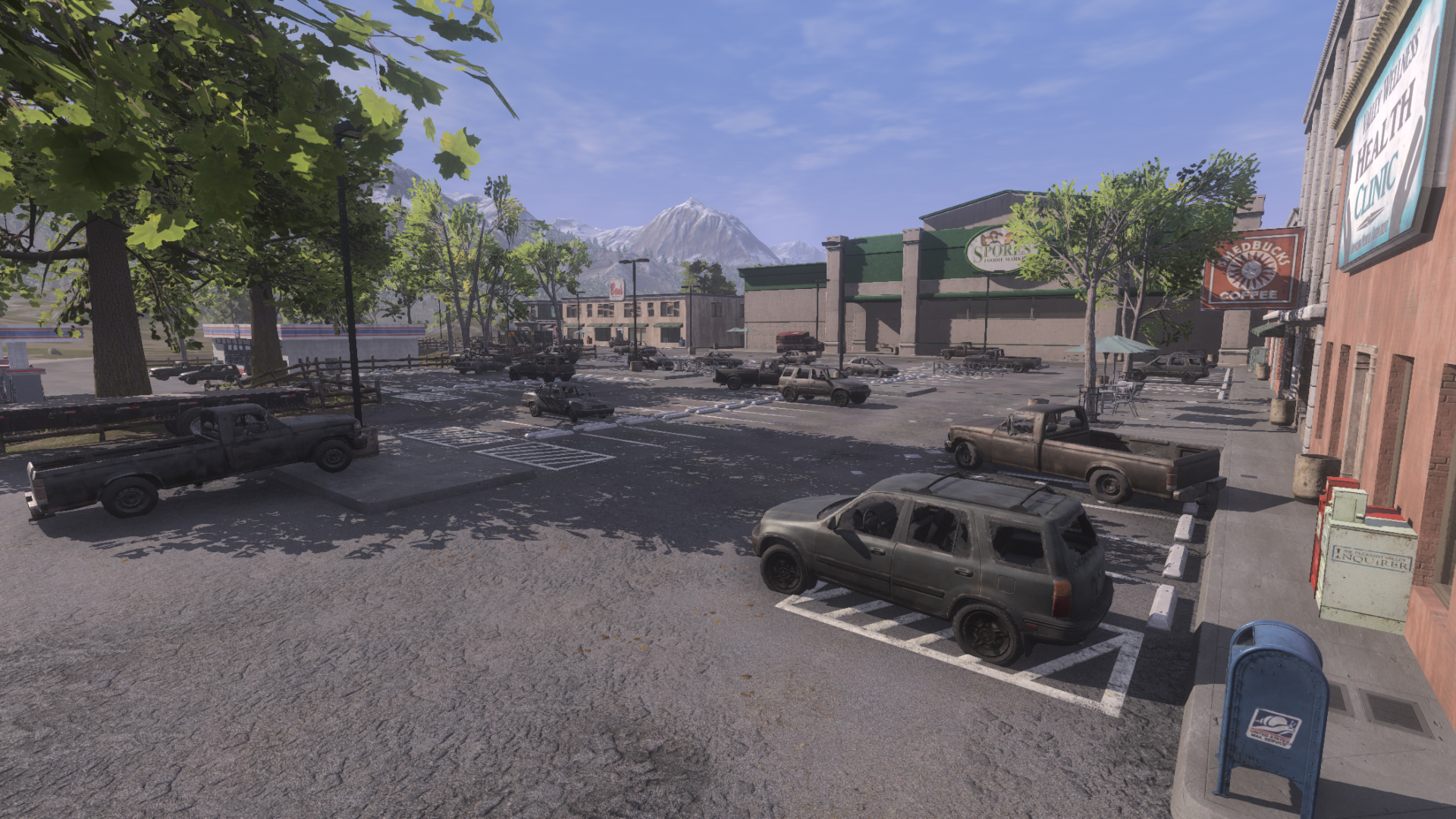 To accentuate moving through and scanning for loot at speed, we added a small outline to all objects that are able to be looted.  This makes it much easier to read at a glance to see what is available to you as you move through the world.

We’ve implemented a series of UI changes to improve access and understanding, including revisions to the inventory and crafting screens and to the crate pages.

Now, all of your crates (locked and unlocked) will be combined into one view, which will make it easier to know what items are available to you.

We see players want to quickly manage their inventory and craft needed supplies, so we decided to combine inventory and crafting onto one screen in an effort to accentuate the pace of play. Let us know what you think of this combined screen - our goal is to help improve overall gameplay speed. 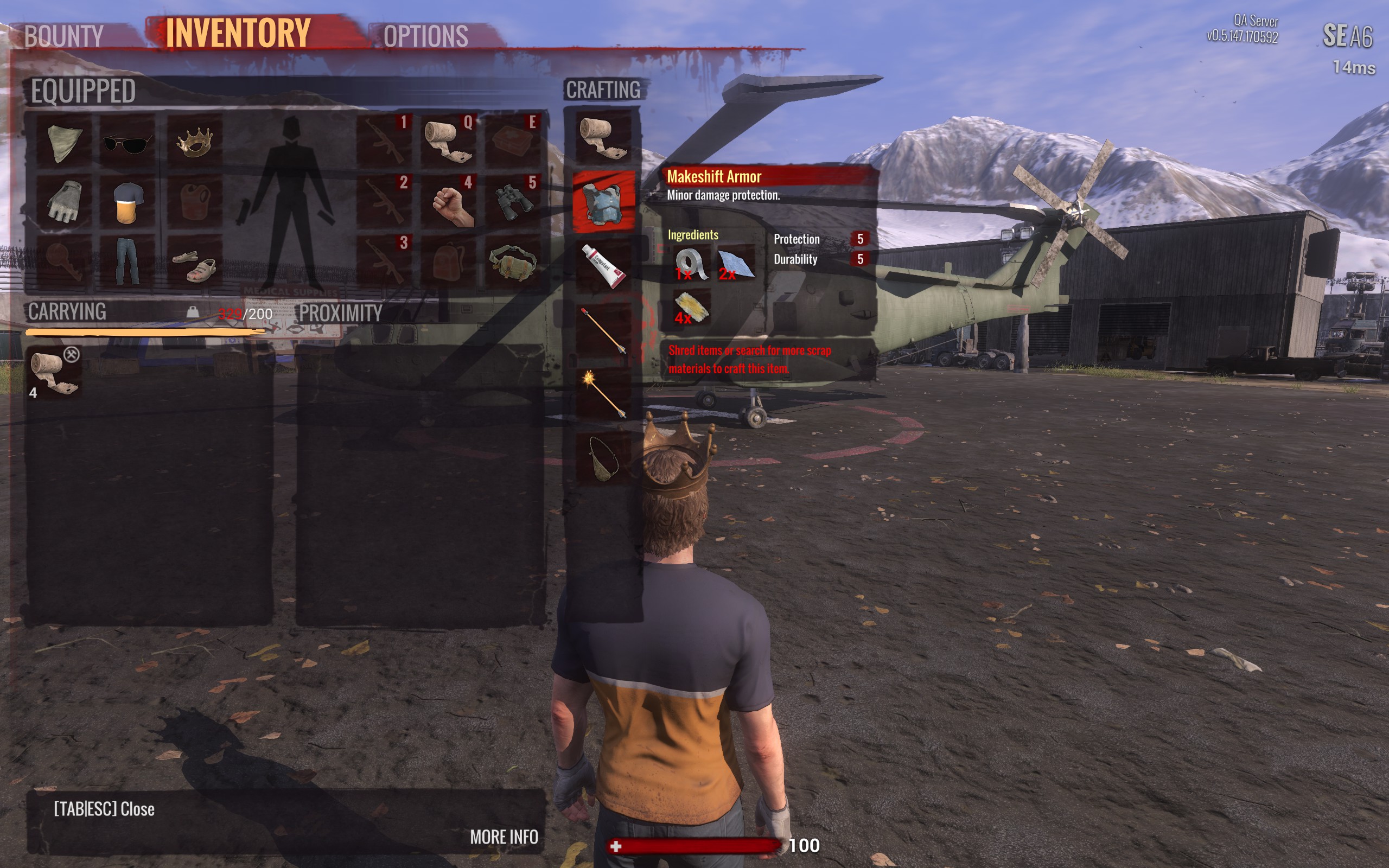 Some new vehicle skins are being added to the game for the ATV, the Off-Roader, and the Pick-Up Truck.  You can set your default vehicle skins in the Appearance section of the menus.  You will also notice now that vehicles in the world randomly use a skin from the whole set in each match.  These new skins are more distinct from broken-down vehicles to make finding a ride a bit easier for new players. 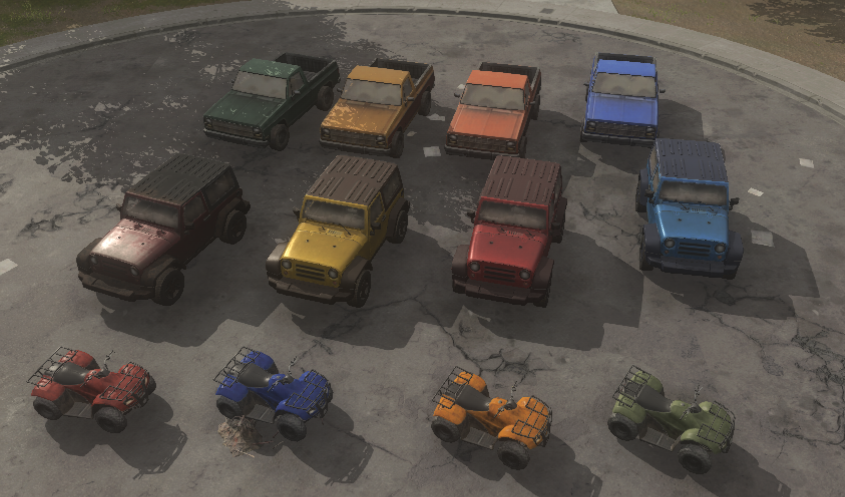 Other Items of Note

We will publish a full list of bug fixes that will be included when we get closer to the actual update.  A couple of notable ones that we are working on right now to include in this update:

I look forward to seeing everyone’s feedback on the Test Server. Jump in, when it goes live and try out some of the changes, and let us know what you think.