Anthony Castoro gives you a little more context about the new Combat Update.

Hey everyone, we've been watching all of the feedback on the combat update with great interest and the entire H1 team has been working hard to tune the features and fix any issues that arise. Now that the update is ready to release, I want to put some additional context around this massive update, which is only the beginning in a new era for H1.

There’s been a ton of good feedback, debate and analysis regarding the weapon changes, so that's where I'll start. In order to understand why we're making any of these changes, it’s important to understand where the game is going. Fundamentally, H1Z1 is a fast-paced, action-packed, competitive BR battle royale game. We intend to lean into those characteristics with an emphasis on team play, but in order to get there, we've got to evolve the game (and the team, and the tech, the operations, etc...).

The key to that evolution is a strong foundation for combat. This update is an inflection point, but it is only the first big step. To do this effectively, we have to share our plans with the community, iterate in public and make adjustments when the feedback/play patterns deviate from our goals. From the very beginning, we’ve involved members of the community in the design and development process. Over the past few months we’ve brought groups out to San Diego on several occasions for hands-on feedback and discussion. Before the update went to test, we hosted a dedicated combat server which we made available to long time players, streamers and pros. Finally, we’ve iterated in public on our Test Server for the past few weeks.  Even though we’ve involved so many of you from the beginning and we’ve communicated WHAT we are doing, I feel that we haven’t done a good enough job of explaining WHY we are doing it. So today, I’m going to make our goals clear AND share some new info that you haven’t heard before.

The goals of the combat update are as follows:

You know something is wrong with a game’s weapon balance when a player parachutes into a warehouse full of guns and doesn’t want to pick any of them up. That’s indicative of a larger problem.

In order to lean into fast-paced, action-oriented combat, each weapon has to have a clear purpose and be functional in the right situations. Currently, there are two dominant weapons in the game, the AR and the shotgun (based on pick-up, firing and kill stats). So, In order to create more variety in weapon characteristics, the weapons were redesigned to rely on mechanics like recoil recovery time and cone of fire (aka “Bloom”) to create noticeable differences in how accurate they are at long range and how rapidly they can be fired with some degree of control. Additionally, cone of fire is an important component for the feedback system, which we’ll get to later on.

After reviewing the available guns in the game, we determined the need to drop one pistol and add an alternative short-medium range weapon, the Hellfire SMG, to provide enough weapon variety. 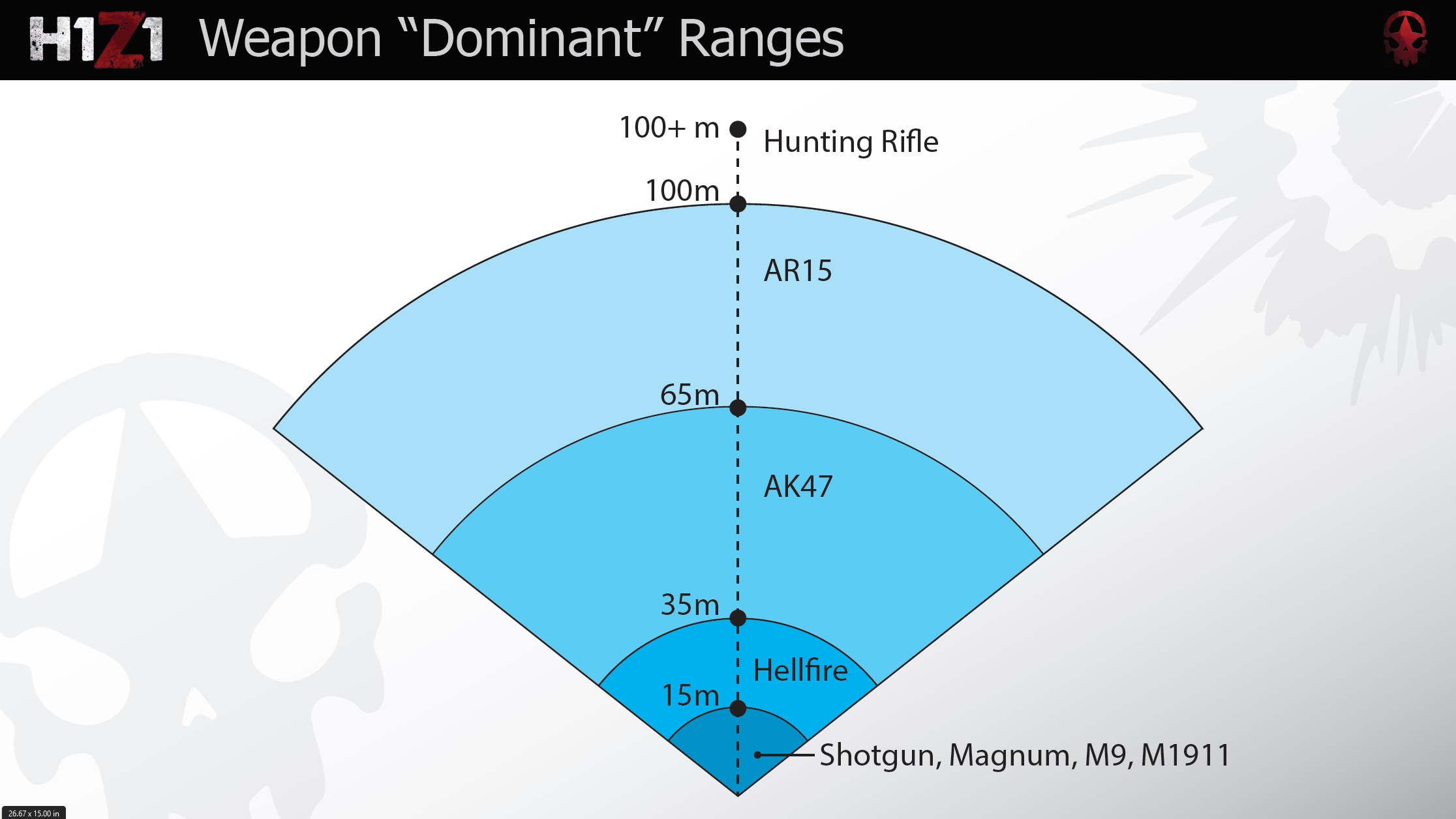 The AK was slotted as a dominant mid-range weapon based on accuracy, damage and the ability to fire full auto. This resulted in perhaps the most controversial change in the game: the addition of cone-of-fire to the AK. A lot of the debate regarding this change has to do with two factors. First, until now, the AK has been the alternative to the AR. This update really moves it into another category, which is a pretty big change. Second, because it is a rifle, for some, there’s a fundamental disconnect to the idea of the weapon being less accurate at longer range. We’ve heard that feedback and as of this writing, we’ve made adjustments that allow the AK to be pin-point accurate on the first shot if you are crouching or prone (essentially introducing a movement penalty). Why? Because we’re confident that if we let the AK be as accurate as the AR and have full auto, it would overshadow the AR in its role as the long-range weapon of choice.

Instead, we’re about to announce a new weapon which will be the true alternative to the AR.This weapon will have high accuracy at long range, but will be balanced with a different set of handling characteristics to make it distinct from the AR. The idea here is to offer diversity and options in all ranges of combat. Expect more info on this new weapon and several more in the next few weeks! (surprise!)

In the meantime, expect the AK to be the dominant weapon at mid-range, but useful at longer ranges in the right situations.

“Easy to learn, hard to master” is one of the basic tenets of good game design. Our style of game doesn’t leave a lot of time to figure out a given weapon’s basic characteristics so “tough to learn, grueling to master” would be a more apt description of H1Z1’s learning curve right now. There are a few reasons for this, but the primary reason is that the game doesn’t give players good feedback on how each gun performs. As a result, players must invest long hours just to become reasonably effective in combat. Unfortunately, that really limits the game’s ability to grow.

Given its unique history, we decided to keep some of the game’s more esoteric concepts, like bullet drop, and synthesize them with concepts more common in the shooter genre. This is the second reason for having “cone of fire” as one of the new elements in weapon design. The expanding reticle that indicates your gun’s accuracy, the tracers and the throw arc indicator are all designed to give immediate feedback about whether you are using the weapon within its effective performance range. If you pick-up the SMG and fire it at someone on the horizon, you immediately know, that’s probably not the best use for that gun.

The more people who try H1Z1 (thousands do every day!) and have a good experience, the more successful the game will be. That benefits all of the game’s players.

I know some players are concerned that we’re removing the skill gap from the game, but in fact  we’re expanding the required skill set beyond pure shooting ability, with more emphasis on weapon knowledge, map knowledge, tactical thinking and team work. We’re also leaving room for some new concepts like combat movement techniques and team play dynamics. These features will give players more options in combat. Even so, highly skilled shooters will still have a distinct advantage over the competition. We’ll be talking a lot more about that in the coming days.

Just keep in mind, the combat update is only the beginning. This isn’t the “end all, be all” combat update. This is a foundational change to bring the basics of combat to a point where we can continue building with confidence.  Once it is live, we’ll continue to watch, listen and learn to make the game as awesome as possible.

We are already hard at work on what’s next, with a renewed focus on fixing bugs, combating cheaters and evolving our game. I’m looking forward to seeing you all in game after the update!