An update from Executive Producer Chris Wynn on Team Scoring, Pre-Season 5, and More!

Our next large game update has some really great changes in it, and we’re excited to bring it to the Test server! This update brings improved dynamic gas rings, adds scoring for team games and a lot of improvements to grouping, brings new POIs to the Arena, and more.

Scoring in team games is now ready for testing. Each time you play in duos or fives, you will see a score for you and each of your teammates. Your team score goes up whenever a full team gets eliminated, a team member gets a kill, or a team member gets an assist. Individual kills and assists are tracked and shown at the end of the match for all team members. The badge that becomes part of your top 10 is the total team score and an accumulation of all kills and assists the team got as a whole, as well as the highest position the last person who was alive achieved. Once you have filled out 10 scores, you will be placed on the leaderboard for that mode just like in solos. We will continue to tweak the score system from season to season until it is balanced. Keep an eye out for a more in-depth article regarding team scoring and more features coming in the future. 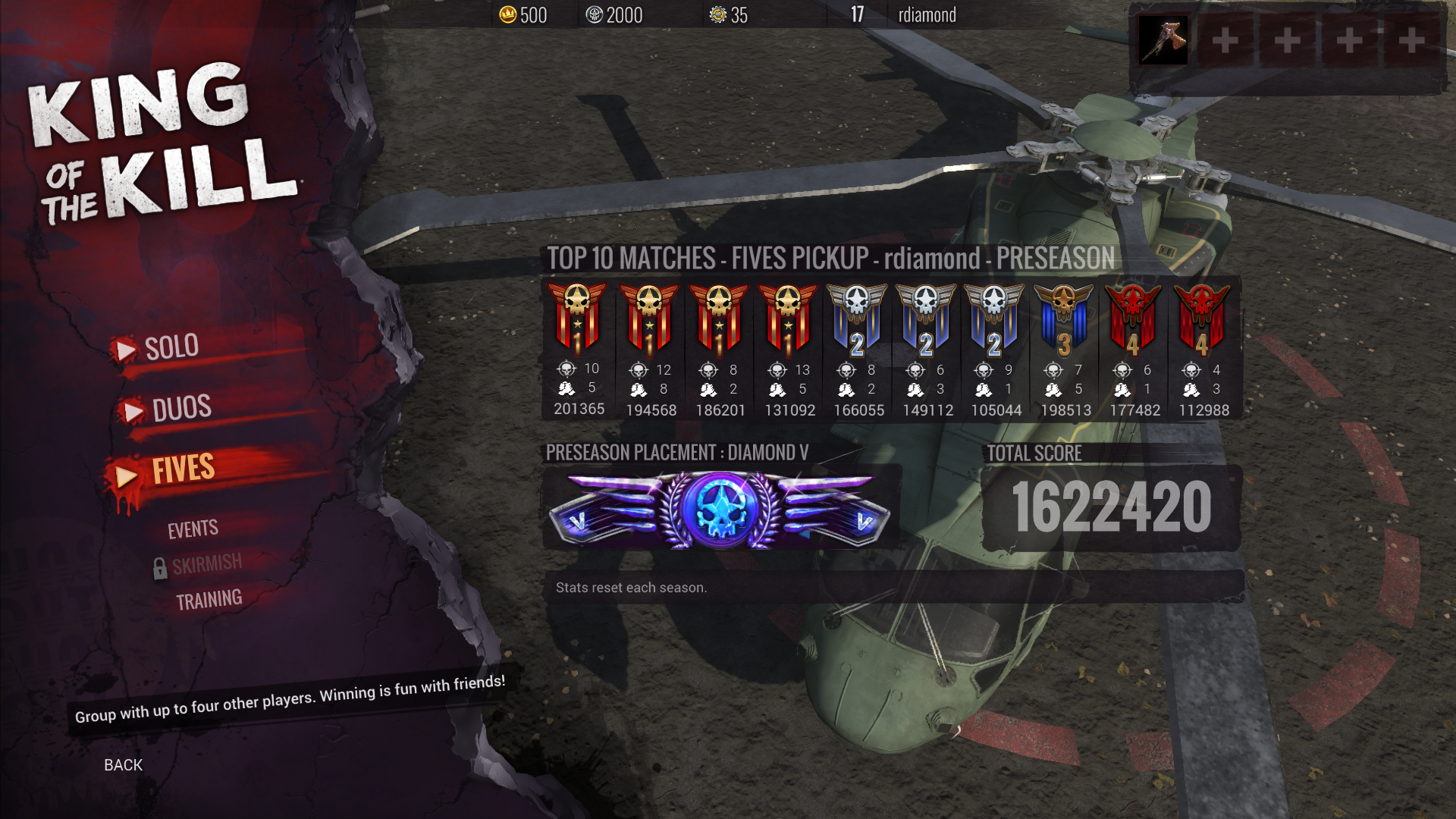 We are going to start the next Pre-Season (Pre-Season 5) when this update goes to the Live server.  In addition to team scoring mentioned above, we are making larger changes to scoring and leaderboards that you will notice once Pre-Season 5 begins. There will be a new leaderboard tier in between Diamond and Royalty, called Master, which will make the Royalty tier even more elite. On the scoring side with this update, players will receive a flat score for each kill no matter when it occurred during the match. Currently the value of a kill increases over the course of the match. We’ll be sharing more details about these changes in the coming weeks.

The biggest change you will notice during your matches on Test is how the gas ring system works. We wanted to create a system that is more dynamic and utilizes the entire map, so we completely rewrote this from the ground up. You can now expect final rings all over the map, including further to reach locations that are currently rarely visited, like the dam. The spawn system has also been updated, and it will now take into consideration where the game will end and adjust how far you spawn from where the initial ring will appear. The rings are still randomized; now they will just utilize the entire map.

Now that you have some context of the system and a visual to back it up, let’s look at some details:

We will also be using the Test servers to tune the timing of each gas wave, with the goal of speeding things up a bit. No specifics to share just yet, but keep an eye on Test as we will be tuning continuously before it goes to Live.

You’ve spoken, we’ve listened. Bombs will no longer spawn in after the top 20 players are left. Now, to be clear, if bombs are in flight and the “Players Remain” hits 20, they’ll still drop, they will just stop dropping after that. So, with that being said, you still may see bombs dropping when there are 20 or fewer left, but with the new setup, you shouldn’t see bombs dropping by the time the top 10 are fighting to the death.

Three additional POIs have been added to continue to fill out the space around Pleasant Valley.

Coy’s Car Salvage – Nestled up on a large hill just west of Pleasant Valley (D6) you will find a large salvage yard dedicated to the collection, dismantling, and shipping of unwanted vehicles. 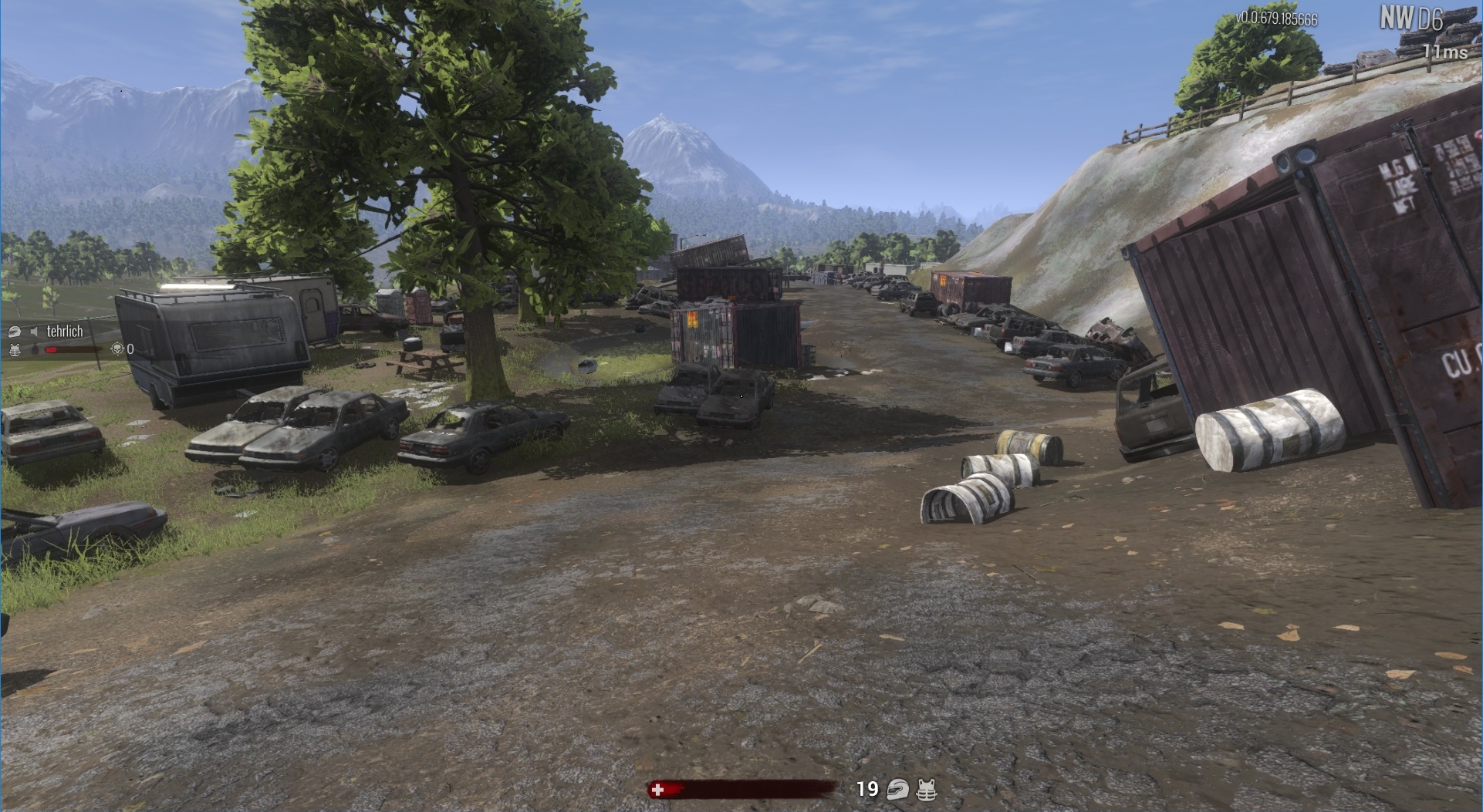 Ponyvale Equestrian Estates – A rustic community for the most hardcore horse enthusiasts can be found on a large peninsula just West of Cranberry (D7/D8). Country living at its finest. 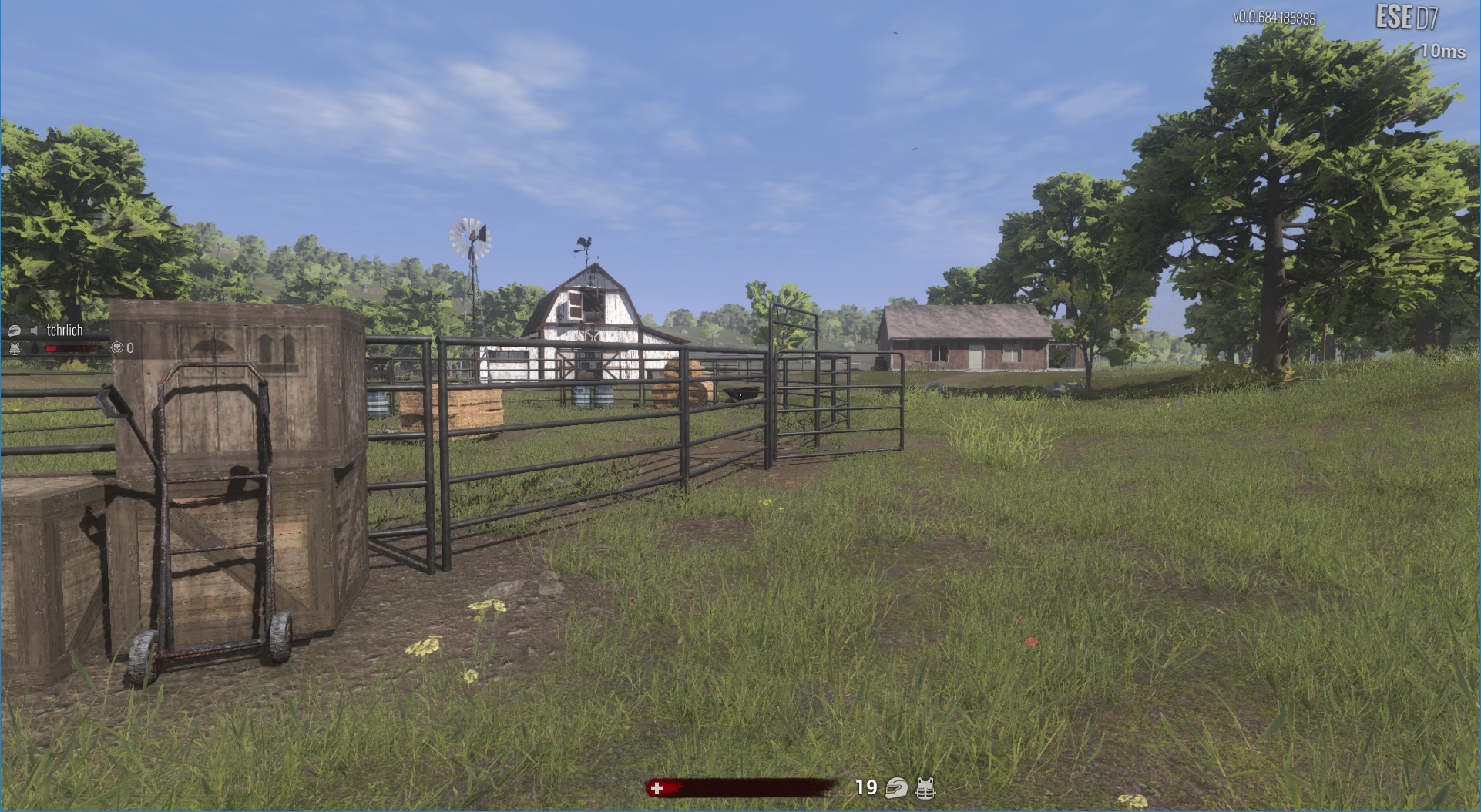 Emerald Hydra, Site 7 – East of Cranberry (G8), this repurposed Romero’s grocery store was taken over and fortified as a military HQ during the zombie outbreak. 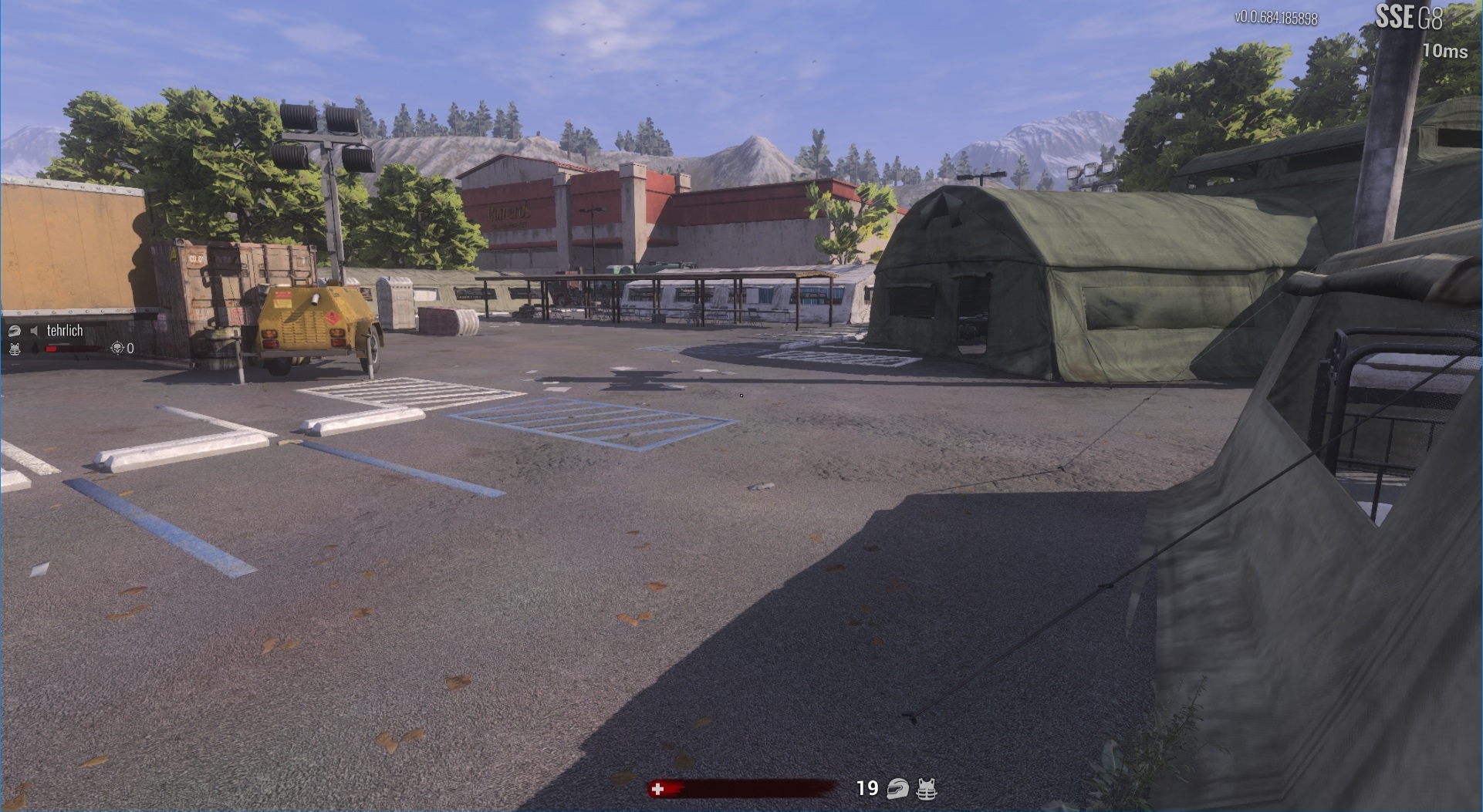 Several smaller POIs have been sprinkled in to provide more areas to land and loot in.

The in-game map was modified to improve the accuracy of the gas rings drawn on the map. To make it even clearer, we added text to the HUD that will let you know if you are currently in the safe zone or not. If you are really trying to just creep into the edge of the safe zone and are worried you are not in the correct location, then the text on screen will be 100% clear as to your position. We will be spending more effort on the in-game map in the future as well.

A small change in terms of overall impact, but one that I love, is that trees now look like trees from above! 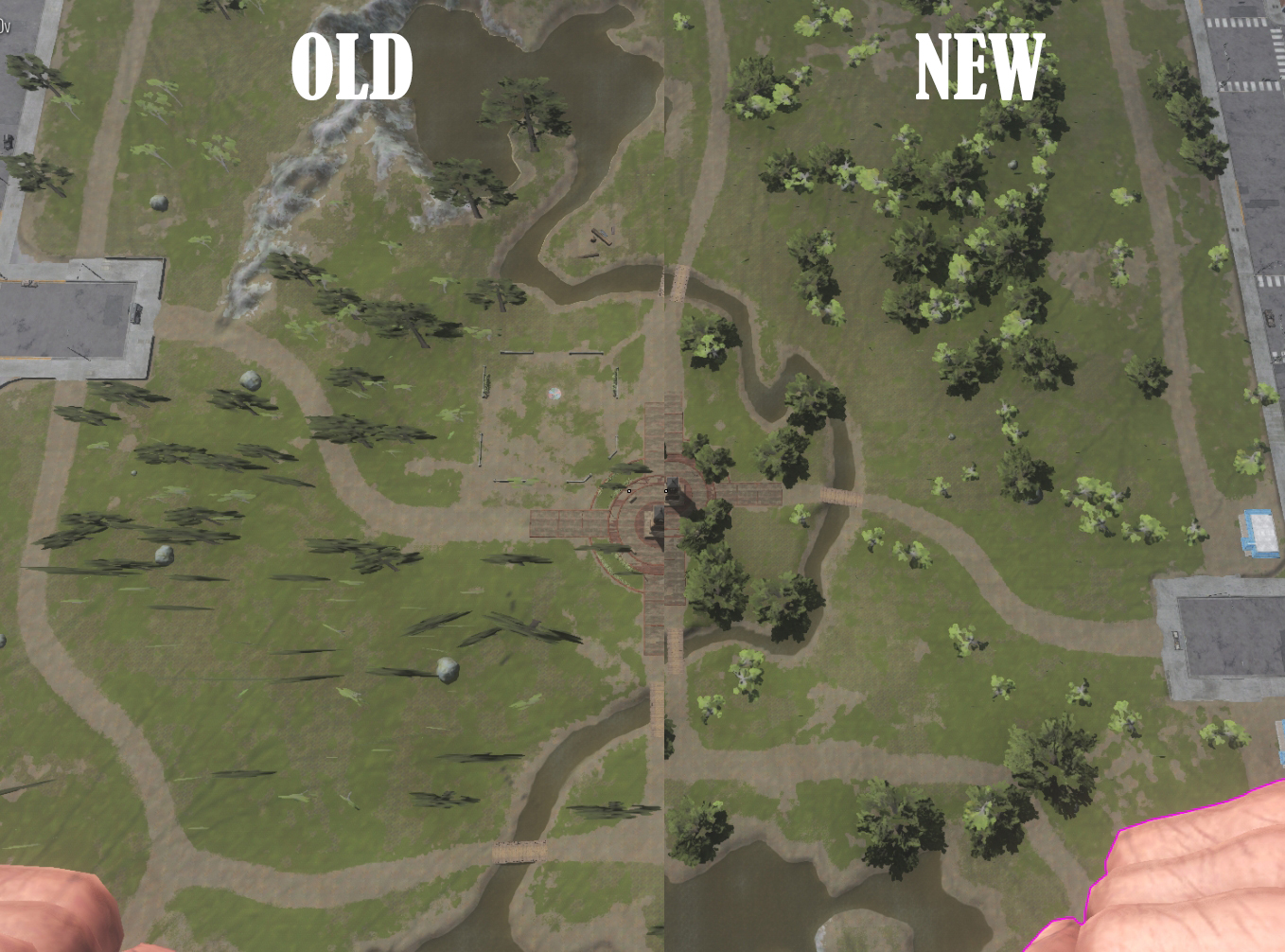 Cleaning up the user interface continues with all of the enhancements targeted at making it easier to play the game. This starts with improvements to forming a duo or fives group in game. Now, there is a section in the group panel that lists the players that you have recently played with. Want to play with that player again? Go ahead and invite to your group and keep playing. If you are part of a group but not the leader, you can suggest someone from your friends list to the leader to invite into your group. 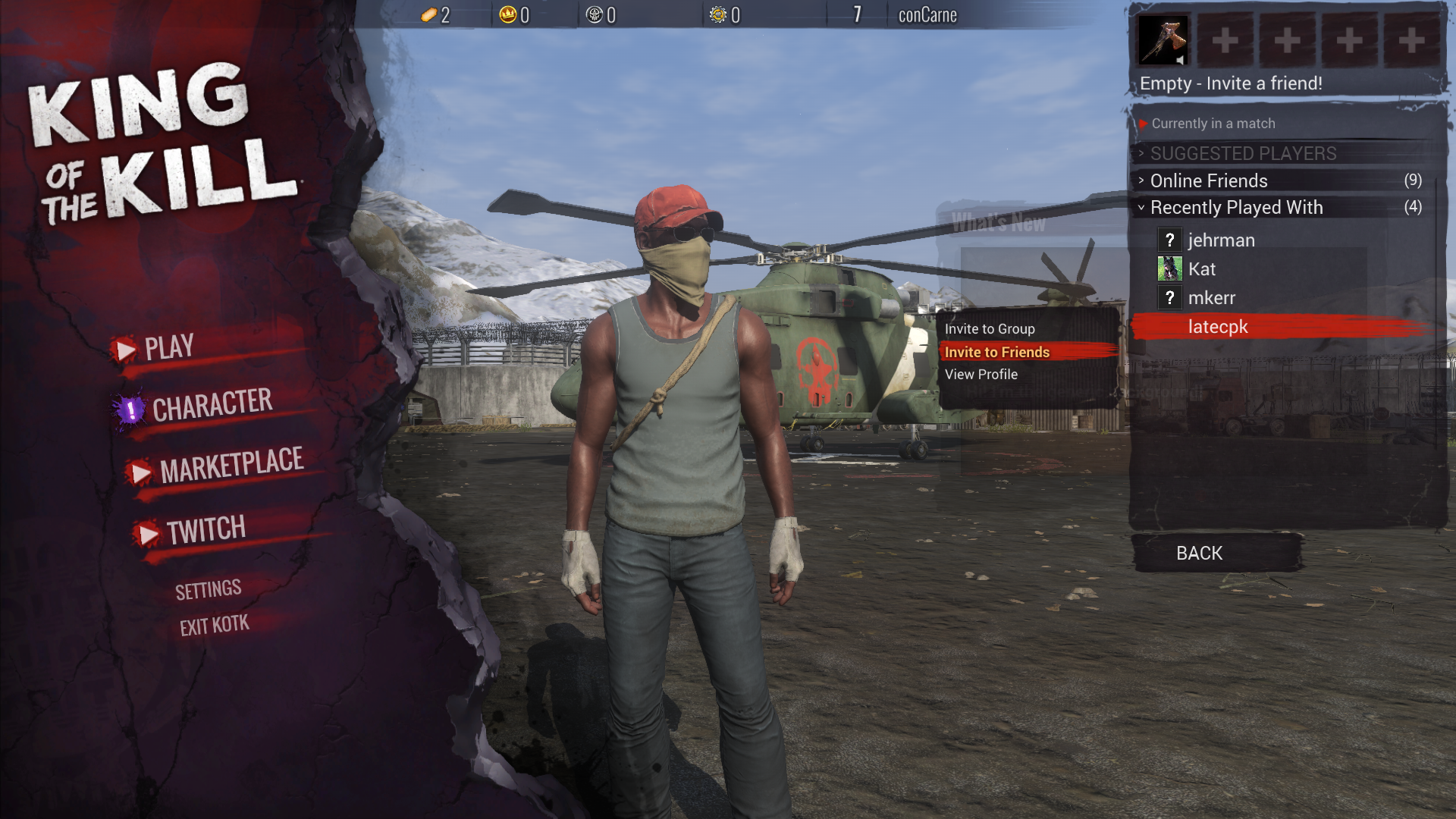 Invites received through Steam will also persist longer. So, if you receive an invite before launching the game, you will have time to launch the game and accept the invite. If you played with a group of random players and want to keep that group together to play more, there is now an ability to stay together and go into another game.

All of the end game information will now animate in piece–by-piece on a single screen (the animation can be skipped with a single click). This change was necessary to get a “Play Again” system in place, which is something that you will see in a future update. 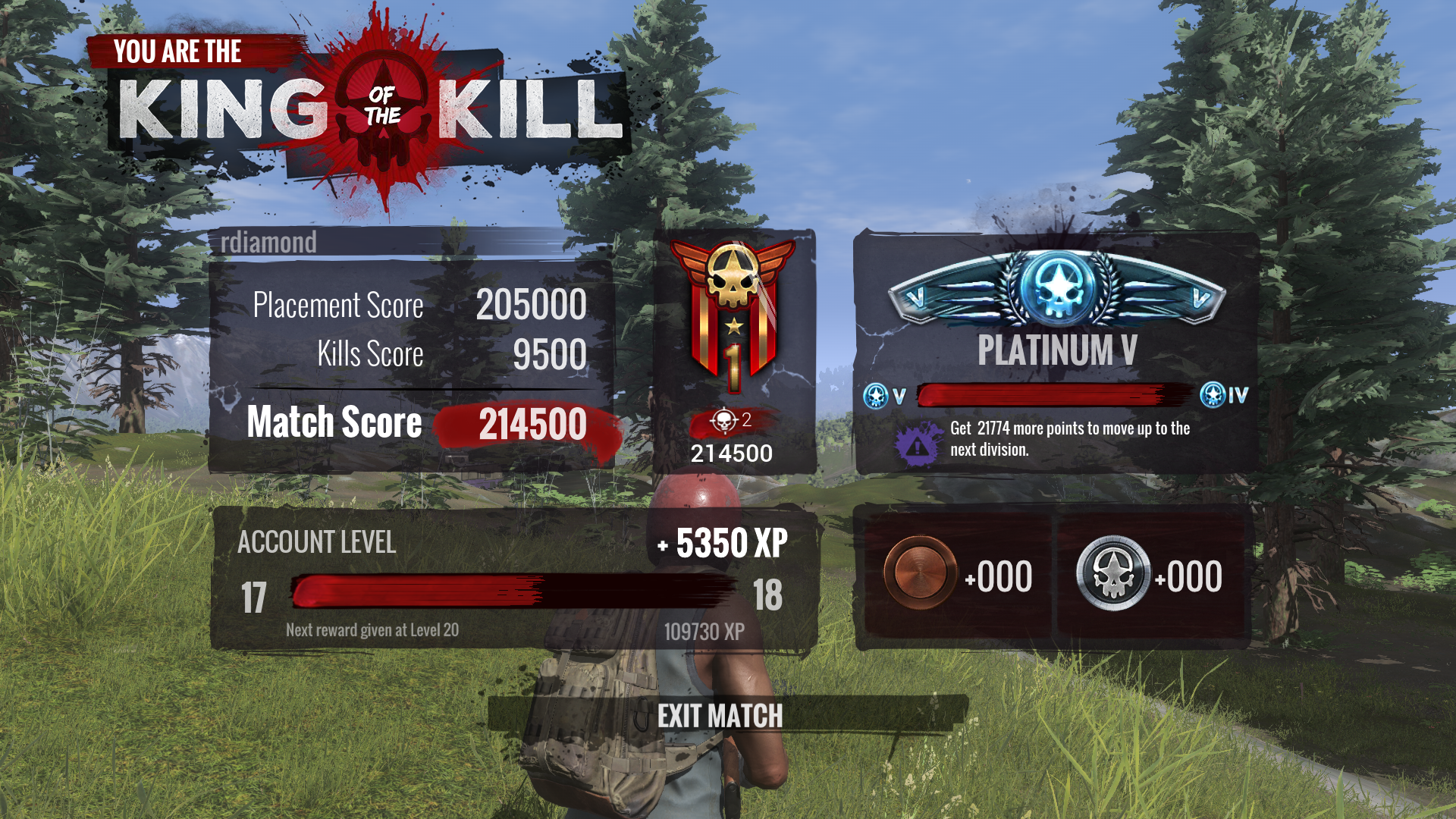 A new panel has been added to the main menu to make it easier to discover Events, Skirmishes, and anything else going on in the game. Pro tip: the panel is linked to the area in the game that it is referencing. So, if there is news on a Skirmish in the panel, clicking on it will take you straight to the play menu for Skirmishes.

We finished work on the inventory back-end for the in-game inventory screens. The most obvious change from this is that the inventory will now NOT auto-sort while it is open. If you remove an item from your inventory while trying to manipulate it or loot, a blank spot will remain there for consistency. Only when you close and re-open the inventory will the items re-sort to fill the empty spaces.

After a lot of consideration, we have identified the next set of changes we will be going with for laminated armor. We heard a lot of feedback about removing them completely, but it was clear that the loot system itself wasn’t working as we intended. Finding a laminated armor in the world should be a treat and a very rare moment - right now it is far too common and laminated armors are normally found in groups. So, with that being said, here are our changes and some context as to why:

We will continue to tune and tweak these values until it feels right. What's going to Test is just our first pass.

Other Items of Note

Spamming hip fire is a hot community topic and one that we do plan on addressing. We are working on larger changes to the overall weapon balance that would include changes to hip fire and recoil here. Pushing these changes out right now without everything that goes with it would create more unbalanced gameplay. We believe players are really going to like these future changes, and this becomes our biggest priority after getting this update pushed out to the Live servers.

We look forward to seeing everyone’s feedback on these changes. Jump into the Test server and let us know what you think!