Hey everyone! We’ve been incredibly busy since my last update, so let’s get right to it.

First, since my last letter, the game has continued to grow at an unprecedented pace, which is huge for us, but it has also presented an entirely new set of challenges. In response to popularity of the game, we’ve reorganized the development team to be able to roll out more frequent updates with bug fixes and quality of life improvements (like this week’s update), while still developing the game and improving the overall live service. This includes growing the team substantially and adding more international support staff to handle the global nature of the game’s appeal.

We have been rolling out service improvements as we make them, usually without needing any downtime or a client update to do it.  For example, over the last weekend, we identified a new technique employed by some players to circumvent normal gameplay. The team implemented new security solutions, and we have banned and continue to actively ban those using the new technique. We are now in the process of cleansing the leaderboards in all regions as a result. We’d like to thank the community for their on-going support to identify and prevent this kind of activity. We are committed to a fair and competitive service and we will always need your help to keep it that way.

I have covered some notes on servers in the last several Q&A’s; server work continues to be our number one priority and will continue to be so until we are happy with how they are performing.  We have been rolling out improvements each week, sometimes multiple times per week, as we monitor performance and collect feedback on how they are doing.  This goes across the board from game servers to login servers and everything in between.

A number of changes have already been rolled out to improve performance. For example, we’ve essentially eliminated queue times.  To achieve this, we installed entirely new hardware in Europe, and we have quadrupled capacity in Asia along with increasing it in every other region. This is something we are constantly working on.

There’s a lot more in progress now to continue to improve server performance.  One of the most noticeable focuses is on the early game lag, which can cause some side effects, such as not being able to interact with objects or, in severe cases, falling through the world.  In addition to other optimizations and improvements to packet sizes, we should continue to see a more stable and consistent server environment.

On the hardware front, we just moved our Asian datacenter to Tokyo which we believe provides a better connection throughout Asia compared to where we were.  In North America, we are beginning work to establish an East Coast server.  When we roll it out, this will appear as a second NA region with its own leaderboard.  Over time, I would like to combine all NA leaderboards into one, but we are focused on getting it out as an option over ideal functionality.  I expect the East Coast server to be available within the next several weeks.

Perhaps the hottest topic in the community right now is “region locking.”  We are currently testing a feature that will force a connection test from your local machine to each datacenter to see which ones you have a reasonable connection to.  We will allow you to play on any region server that you have a reasonable connection to, but if your connection is too poor to a given region, we will not allow you to play there.  I also expect this to be available in the next content update.

We are prepping an update to go live this week with a group of fixes that are currently on our Test servers.  We intend to roll out smaller updates like this every few weeks. If you didn’t get a chance to play on Test, here is the summary of what to expect.

Door Desync: We identified and fixed a few issues that could cause doors to appear open for one player but closed for another. We will evaluate if these fixes represent a comprehensive solution, or if players continue to encounter the issue.

Vehicle Passenger Desync: There was a similar desync issue where a player could be in a vehicle but appear out of the vehicle to an onlooker. We've deployed a potential solution and will continue to investigate whether there are any other fixes necessary.

There was an issue where interrupting a gun reload at the beginning of the animation could cause the gun to fire a ghost bullet and reload again. We've submitted another potential fix as well as set up some additional logging to help collect more data when reloads fail. Definitely let us know if you encounter a reload issue!

Players who die immediately before being struck by a vehicle should no longer cause that vehicle to explode. In order to reduce unexpected vehicle explosions, the team is working on updating The Arena with a number of object and collision fixes; however, that won't be ready for this update.

We take exploits very seriously and jump on them as quickly as we can. Thank you to everyone who has sent videos and repro information for these - it's very, very helpful and allows us to diagnose and respond faster. If you are familiar with these, please go ahead and try to do them on Test and send us your feedback!

When I talk about Content Updates, it will be referencing a larger game change, usually introducing a new set of features or significant improvements to existing features.  I mentioned at the end of last year making a lot of changes internally. One of those changes is how we plan and execute the work in front of us.

We have changed up a lot in the background, which is the reason why it has been awhile since the last content update - we had to reset things a bit. This next Content Update (detailed below) will land on Test in the next few weeks. After we’ve had some time to evaluate it, we’ll announce a firm release date.

This one is pretty loaded with good stuff going into it.  More details in the coming weeks, but from a higher level, here is what we are planning: 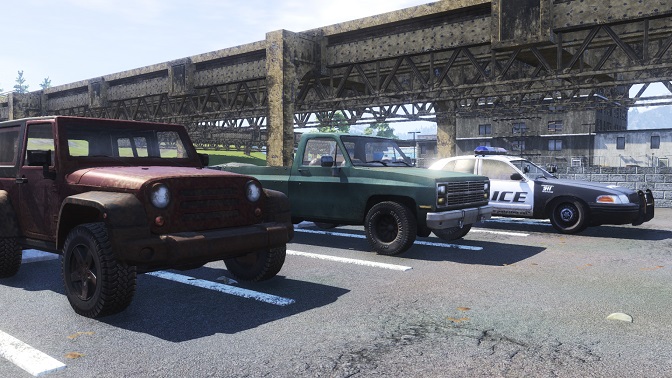 To help keep quality connections within appropriate regions, a new connection test will be implemented.  This test will check your ping to each of our datacenters.  If your ping exceeds 150ms to a region, then you will not be able to choose that region as one to play on.  It will simply not allow it.  This will help keep all players in fair and consistent matches. Look for this new flow in the character select screen as you start the game.

We have a new iteration that worked out the kinks and the camera is now much smoother as it follows your teammates around.  There will also be some new UI elements to help you understand the current state of your team.  I am really happy with how this turned out and am excited to get it live.

A few vehicle changes are going in to help prevent end game situations with all cars just driving around in circles.  The first will be vehicle performance degradation. Cars will lose more performance based on the amount of damage they have taken, including losing their turbo. This will be pretty obvious with a new UI element to display the amount of damage and warning lights with the current state of your ride.  Secondarily, you will now not be able to exit a vehicle that is travelling above a set speed threshold.  We look forward to your feedback on these changes, particularly when they arrive on the Test server.  We want vehicles to provide an advantage, but not become a negative experience at the end of the match.

While we continue to work on servers to create the best experience possible, we wanted to make some changes to how combat is messaged back to you as a player.  When players talk about hit registration, it is actually a much more complicated problem that includes messaging and feedback during combat.  We updated the effects and sounds to make it a lot more obvious when you are hitting armor versus flesh, when you are on target vs off target, or when your armor pops in the middle of a gunfight.

There will be a change to the imposed seven-day trade lock on items received in your inventory.  The seven-day trade lock will now only be imposed on any new items you receive from the game.  If you received the item via trade, no seven-day trade lock will be enforced.  Essentially, it just means there will be a seven-day lock applied once to each item when it is originally obtained, but not again after that.  A caveat on this one that there are some other priority contentions, and we may end up pushing this out after the next content update.  Our goal is to include it as part of it, but there is a chance we may have to move it a little.

A new iteration of The Arena will be included in this patch with a number of changes and improvements including:

I am pretty excited to get this patch out there; it has a lot of things that have been in progress for a long time, along with a lot of foundation stuff to setup some other much-needed fixes to the game. Between now and the next major patch you can expect more communication from us. Big thanks to everyone who comes out to our Q&As on Reddit and Twitter and everyone who provides feedback from their experiences on the Test Server.