Today's update for H1Z1 on PC brings back Z1 favorites, features some new rewards, and introduces the brand new Apocalypse Crate! All PC Live servers will be offline starting at 8AM PDT on Wednesday, June 27 for an estimated 4-hour downtime to bring you the below.

Welcome (back) to Z1, now available on PC Live servers! The remastered Z1 map (also known as "Outbreak") is an 8km by 8km map. Outbreak is meant to appeal to all players of H1Z1, old and new, by capturing and maintaining what made Z1 fun while also updating and refining the map for battle royale gameplay.

Veteran players may notice a few smaller POIs in the northern and western areas of the map, along with new loot spots in the otherwise sparse areas. The terrain has been refined for improved navigation and to make it clearer where you can and can't drive a vehicle. Buildings have been updated to be more performant and visually appealing. While most building layouts are unchanged, some were revised to better fit within area, window, and door metrics to make combat and navigation more consistent and less frustrating. All of this was done with an overall development philosophy to keep the footprint of the classic map and retain what made each city and POI fun and interesting.

The new map Outbreak is now available for play in all regular modes - Solos, Duos, and Fives - as we are currently in an off-season until Season Two kicks off in July. Based on community feedback and survey results from the Test server, spawn selection has been disabled for Outbreak. In addition, there are multiple lighting and climate schemes for Outbreak that will randomly rotate from match to match (take a look at some examples here). Finally, as we know many of you are fans of the Z2/Arena map as well, keep an eye out for how it could reappear in Arcade mode moving forward! 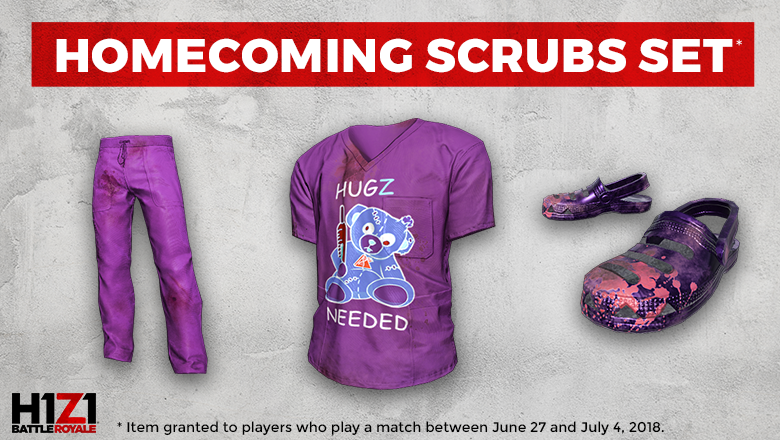 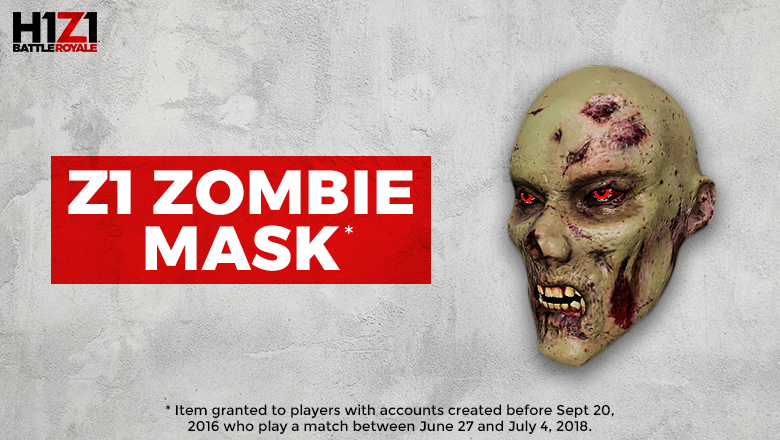 The Z1 Zombie Mask is our way of saying "welcome back!" - if you have an H1Z1 account that was created prior to September 20, 2016 and play 1 match of Solos, Duos, or Fives between 12:01AM PT on Wednesday, June 27 and 11:59PM PT on Wednesday, July 4, this haunting helmet is yours to keep in addition to the Homecoming Scrubs Set.

Both of these rewards will be granted directly to participating players towards the end of next week, after the eligibility window closes. 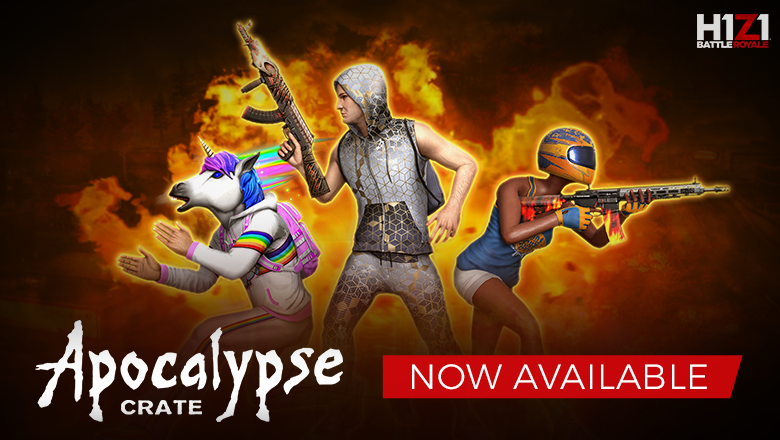 Fight like it's your last day on earth with the items from the NEW Apocalypse Crate, available now from the in-game Marketplace! Get magical with the new Rainbow Unicorn set, stay cool with the Sun's Out items, or grab the first ever Legendary gun skin - the Apocalypse AK-47 - featuring a unique new model! Check out everything that's inside the new Apocalypse Crate here.