[UPDATED] Welcome To Season One!

It's all been leading up to this. 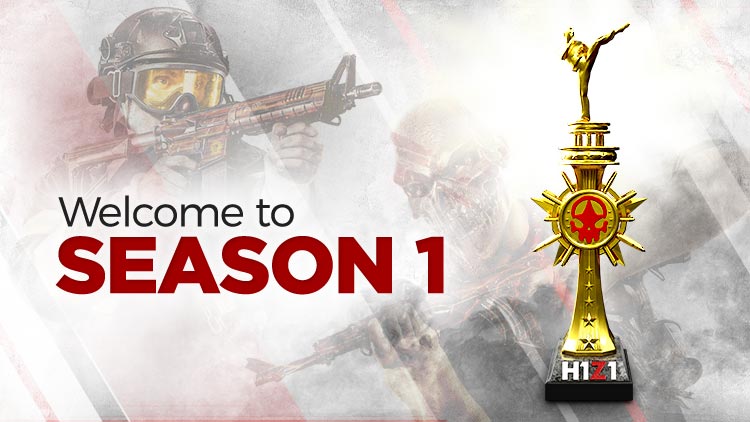 Starting with Preseason One, we set out to make H1Z1 as competitive and rewarding as possible. We added Team Scoring for Duos and Fives to continue that trend. With each Preseason we shook up the point values and Tier distribution numbers and made future decisions based on previous Preseason data. We gave out rewards for end of season placement and players were fully sporting their accomplishments in-game.

Now that we're out of Early Access, it's time to put Preseasons behind us and get started on the culmination of all that work: Season One! Here's a breakdown of our new Scoring System now that we have data to work with and we understand how players are behaving.

Season One introduces a revised scoring system that reflects a player's overall performance through the season. During the Preseasons, Royalty was solely achieved by a player's ability to get high kill games and nothing else. This lead to player behavior of jumping into a match, getting as many kills and possible and not caring about anything else. The new scoring system starting in Season One rewards players who can get kills AND place well on a consistent basis. The skill to accomplish both a high kill and high placement game separates the top players from the rest.

The formula we're using to generate your overall score comes from taking your 10 best matches as a base, and then we apply a modifier to it based on your average kills per match and average match placement for the season. The important thing to note here is that if you perform poorly over and over again, you can find yourself sinking into a lower Tier.

So, how does this all work? What are some of the details? What does this mean for kills? Let's take a moment and break some of that down so we can provide the context and insight needed to help everyone understand our end goals. Here's the base equation so you can understand what's going on behind the scenes:

(There's a lot more to the equation than just that, but this showcases the basics and how we're coming up with your rank for Season One.)

This equation gives us a ton of control and tuning knobs to adjust and emphasize the aspects we'd like to. If we wanted to make a Season about nothing but your Top 10 games, we set the min and max multipliers to 1 for placement and kills. If we want to emphasize kills, we can; same goes for placement. For Season One, while Placement is a factor, we've decided to give the Average Kills Per Match a higher modifier, so while Placement definitely matters, Kills per Match are still extremely important and carry a heavier weight in ranking. You'll need both if you want to rank among the elite!

Similar to previous Preseasons, the score thresholds for each Tier have been adjusted slightly:

Looking for some examples on what to aim for if you want to reach the top of the leaderboards? Here's what some of the current averages are that you'll need to reach Royalty 1 in each mode type:

Keep in mind that the above are just examples, and the system awards players more flexibility when it comes to how ranks are achieved. For any of these examples, you could get fewer kills in your Top 10 but increase either your Kills Per Match Average or your Average Placement and still reach the same rank. One of our goals with the new scoring system was to give you the ability to play how you want to play, and allowing this kind of flexibility helps us deliver on that goal.

So, how did we come up with some of these numbers? Data! We did a massive dive into the data from prior Preseasons to see how players stacked up in general and we found that the above combination was a good mix of consistent playstyle and aggressive killers. Keep in mind, the above examples are all SEASONAL averages - for something like Kills where you're expected to get 5 kills every single game, players should be fighting opportunistically and making calculated plays (rather than camping).

We're continuing the tradition of rewarding players at the end of every season based on what Tier they achieved. As before, you'll only need to reach the required rank in ONE mode in order to be eligible for the Emote, and you won't earn multiple Emotes for placing in multiple modes. However, you WILL receive the designated amount of Skulls from each mode based on your placement. In summary, while you'll only receive one instance of an Emote that you qualify for, you'll receive the Skull payouts of each Tier across modes. Since it's possible to sink into a lower Tier during Season One, the rewards you receive at the end of the Season are based on the highest rank you achieve within the Season, NOT the rank you finish with at the end of the Season.

Here's what you can expect out of Season One:

Along with Season rewards, we've also introduced MATCH rewards in the form of the Victory Crate - you can read all about that right here.

We want to thank all the players that joined us on the ride through Early Access and the various Preseasons. The feedback and data you were able to provide during that time was invaluable. And now, without any further ado…welcome to Season One!